Coral Springs is not on my regular flight path and when my son, Dale, invited me to dinner celebrating his birthday I had to consult Google for the best route. This restaurant was easy to find in a strip mall currently being reconstructed along University Drive. 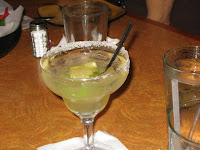 Sheree found this place on South Florida Dines and after reading the reviews she thought it would be a great place to go; and she was right. She bought a coupon at a great discount price to help offset the cost of the soiree.

﻿ Once we all arrived we ordered a round of drinks and a couple of appetizers to get us going. I wasn't fast enough with my camera though. Before I had a chance to snap a shot most of the beef stuffed potato and ham croquetas had been absconded and most of the nachos were already scoffed up.

﻿
﻿ The appetizer portions seemed rather small for the money but they were delicioso! The croquetas cam with a small amount of seasoned and grilled onions that were extremely tasty.

Lauren's Muchos Nachos were topped with grilled chicken and the nachos had the perfect blend of ingredients making them quite tasty.

Our server provided a continuous flow of beverages while we savored the appetizers.
﻿﻿﻿﻿
﻿﻿﻿﻿

After the appetizer plates were cleared from the table, out came our entrees. Larry ordered the Sesame Salmon, crusted with sesame seeds and seasoned with oriental spices.

Pat chose the Chicken Fajitas which she really enjoyed.


Dave and I both chose the Palomilla A La Plancha, grilled thin sliced sirloin steak with grilled onions, black beans, and rice.

Sheree had the shredded pork, Lechon Asado, marinated with mojo and a blend of spices topped with grilled onions.


And Michelle. Michelle ordered the Paella De Mariscos. Ever since we went to Las Vegas restaurant on Hallandale Beach Boulevard, Michelle has had a craving for paella. Now was her opportunity and she wasn't going to let ot get away! She ordered the Paella De Mariscos, without the calamari. It comes with Saffron Spanish rice mixed with shrimp, scallops, clams, and mussels.