My grandson, Dylan, loves this place and he thinks they have the best fries. I checked out the website and discovered that this burger joint started out as just Boardwalk Fries; adding the "decadent" burgers later on. 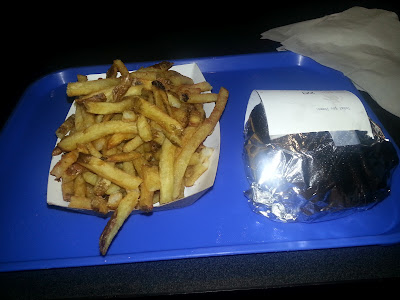 This place is just another of the many new-style hamburger joints that are popping up as the hamburger frenzy keeps going. Much the same as Five Guys and Burger Fi that are also opening up new locations weekly.

I think the single and double patty idea is about worn out. All they are doing now is adding all sorts of unique and sometimes oddball toppings.

I came to Boardwalk for a burger and fries on a Sunday night at 7:45pm. I guess it would take a trip or two to really understand how to order. They have a list of "free" add-ons and a list that are "not free." If you add on a few extras it could get a little pricey. My total cost for a double burger, medium fries, drink and tax was almost eleven bucks. 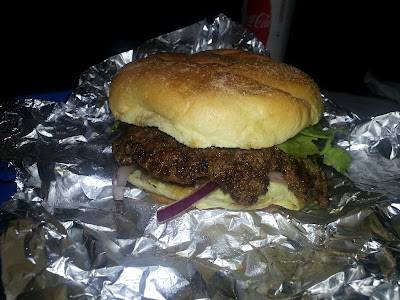 The place was empty except for a gentleman waiting outside for his take-out order as he talked on his phone. I tried a double burger, no cheese, with lettuce, tomato, red onions, and pickles.

The hamburger was prepared fresh, just like the other places mentioned above. It was well done and built pretty well with the patties centered properly. One of my pet peeves is getting a burger that is sticking out of the bun on one side and you have to rebuild it before taking a bite. It was juicy and tasty but by the third bite I realized that the mustard was left off. Both employees were missing so I continued sans mustard. I would say that the burger was not any better than a Five Guys or a Burger Fi burger.

I was really expecting that the fries were going to knock my socks off, but I was wrong. I ordered a medium, but I think the server "super sized" me for some reason because I could only finish about 2/3 of them. They didn't seem fresh; like maybe they were made an hour before and they had a little after taste. I definitely like the Five Guys fries better.

I chose to eat in and for the twenty minutes I was there not another soul walked in and when I left I saw that they would be open for another two hours! I hope the traffic is better during the day.

The bottom line is that there's not anything special here. Decent burger and fries, but nothing exceptional unless your looking to add some decadent add-ons.