Michelle and I recently had the opportunity to go to Atlantic City, New Jersey, along with Steve and Illona. We rented a car so we would have the ability to travel around the area and not get stuck spending all our time in the casino.

Steve has wanted to visit "Carlo's Bakery," made famous by the "Cake Boss" TV show on the Learning Channel and this was his chance. After a two and a half hour car ride we arrived in Hoboken and got directions from a very nice Hoboken resident. Steve parallel parked on Washington Street about a block from the bakery, right near Imposto's Pizzaria.

Naturally we had to try a slice of "New Jersey" pizza to compare with what we have in South Florida. The first big difference I noticed is that the pizzas in Jersey were always very large. Like 18" to 20" in diameter and even bigger. They slice them into eight GIANT size slices and one slice is usually enough for a meal. I chose the "meat lover's" which came with sausage, pepperoni, ham, and meatball. 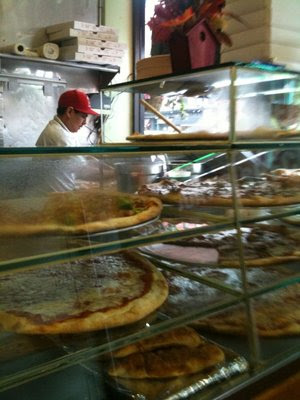 I like the taste of leftover pizza. That's exactly what you get when you order pizza by the slice. They make a large pizza and put it on a shelf until someone orders a slice. Then the slice is placed in the oven and warmed up before being served.

My pizza slice was so large it had to be served on two paper plates and so hot I had to let it cool for a few minutes before biting in. I picked up the slice and was able to "fold" it without the tip sagging and the ingredients sliding off. This is one mark of my perfect pizza. The next was when I took my first bite and the crust broke off in my mouth crisply and I was able to separate my bite from the rest of the slice easily.

I can't say whether the pizza I experienced is representative of "Jersey" style pizza. It had excellent appearance and crust. There was a good balance of flavors and was very satisfying. I do not think that it was any better than some of the pizza I have eaten at home.

Michelle, Illona, and Steve all enjoyed their slices but none of us were blown away.

Since there was a five hour wait to get into Carlo's Bakery we opted for a few pictures and continued our journey leaving the Cake Boss and Imposto's Pizzeria behind. Tell them you read about them on this blog. www.WhitePlateSpecial.com

I am glad you had a good experience! I did not! We tried the subs and pizza and it was not good.