Somehow when you go to a newly opened restaurant you get a feeling of whether this place is going to make it or not. When you go to Gamaroff's for the first time you will see that this is not their first rodeo. They know how to do it and how to do it right!

Gamaroff's is located in the high traffic area of Aventura/Hallandale Beach area where they are exposed to an abundance of locals as well as tourists and they know that in order to keep the highly critical local patronage they must offer good food, uncompromising service, and excellent prices. They do all three and do it beyond expectations.

A recent Saturday night had me jonesing  for a new place to dine when Michelle suggested that we try Gamaroff's. She had heard several positive comments about it from patrons of her salon in Aventura. I have an aversion to waiting in lines to spend my money and the place was packed but we opted to wait the 20-30 minutes that we were told. Since we were only a party of two we were seated in about fifteen minutes in a "half-and-half." A booth on the wall and a chair on the other side of the table. Works for us!

There was a lovely couple from New Jersey on one side of us and a pair of friendly French Canadian gentlemen on the other. I went to the men's room and asked Michelle to order drinks and an appetizer for us. I was greeted by an ice tea on my return and we started discussing the menu. Before we had even made our choices the onion blossom was served. 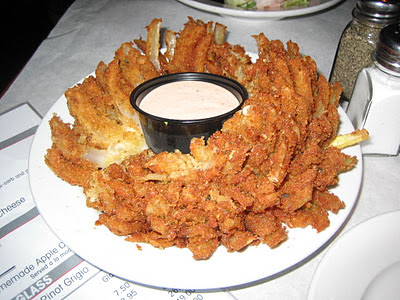 Likewise, there was one served to the gentlemen beside us at almost the same time. I tried to break a few of the fried onion pieces off but ended up having to use my fork and knife to cut and release them. The "fried" part was good. Nice texture and good seasoning. But about halfway down there was no coating, just raw onion and it was sickeningly greasy. Only the tops were edible. I offered some to the NJ couple who had already finished their dinner and they tried a few pieces and said that it was good. I would never order it again. Strike one. 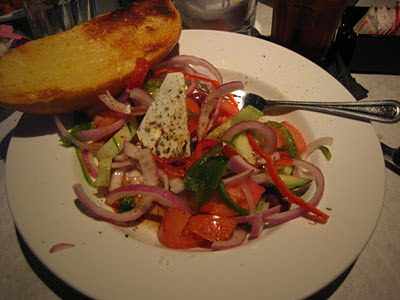 The menu has quite a few items that I was interested in trying and the first thing that I noticed was that most items were A la carte. This made the prices seem more friendly than they actually were. Michelle and I decided to split a Greek salad even though the server told us that it did not have any leafy items in it. I said okay but after we got it I wished I had ordered a Caesar or House salad instead. The salad had exactly what the menu said in it. My fault but Strike Two. 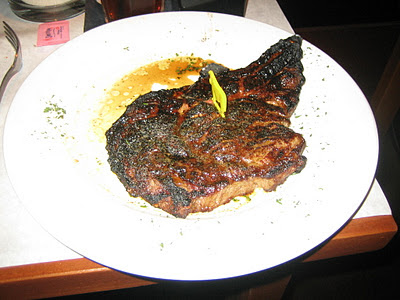 I ordered the bone-in ribeye for my entree and if you've read a few of my blogs you know that I like it Pittsburgh medium. It was perfectly cooked and tasted just as good as it looked. Michelle's salmon was also cooked to perfection and tasted great. 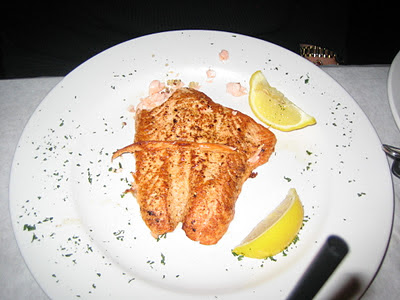 Our sides, a giant baked potato for me and quinoa for Michelle, were both delicious. 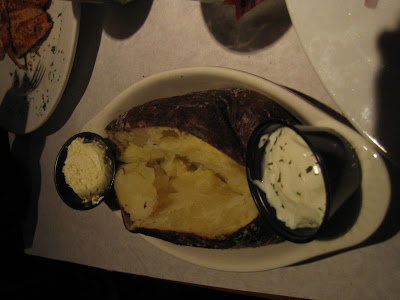 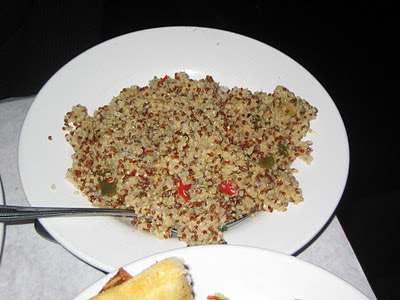 ﻿We ended our meal with a succulent warm chocolate brownie a la mode and coffee. All-in-all I thought the food quality and taste were exemplary. The service was better than would be normally expected and the prices were in line. Because of the a la carte pricing I can see where sharing could make a very economical meal.
I took half my steak and potato home and enjoyed it almost as much the next day. I really liked this place and I am looking forward to a return trip. If you go make sure to plan ahead because on the night we went there was a very long waiting list and from what I understand it is that way most of the time. Be sure to tell them that you read about it here and that I called it a "home run!"