I was really in the mood for a 'Renegade Sirloin' from Longhorn but when we found out we would have about an hour wait to be seated (even with our call ahead) we opted to try the place next door.
We were on Sheridan, in Hollywood and in the next parking lot we saw this place.

I okayed it and in we went. Patron Azteca is a typical looking Mexican restaurant. Decorated in beiges, yellows and a Mariachi band on Friday and Saturday nights. They have several tables that are comfortably placed to allow plenty of room. You don't feel like you're just an extended part of the table next to you.

We were cordially greeted and seated immediately. It was about 8:30 PM so the prime eating crowd had already passed through. We were served a plate of bean dip, chips and salsa while we gave our drink order and checked out the menu.

The menu was 'gigante' and had too many wonderful sounding items available. It became what I call 'the misery of choice.' Which item to choose. There were so many that I wanted to try. Not only did they have all the traditional Mexican dishes that you can find in every other cantina but they also have many other more obscure dishes which looked and sounded fabulous.

Illona took the Borrego: Mexican lamb shank. Michelle chose a burrito and Steven and I picked the combination plates which come with a plethora of choices, including just about all of the well known favorites with our choice of fillings. Since we are both 'macho' men we had to have the 'macho' combination. Three items with out choice of fillings and two sides. Steve got a beef enchilada, tamale and taco while I chose a ground beef enchilada, a ground beef burrito and a picadillo tamale with sides of refried beans and Mexican rice. While we waited for our entrees Steve and I each tried a cup of the tortilla soup. I overloaded mine with the spicy salsa to kick it up a notch and paid the price with teary eyes and a runny nose afterwards. 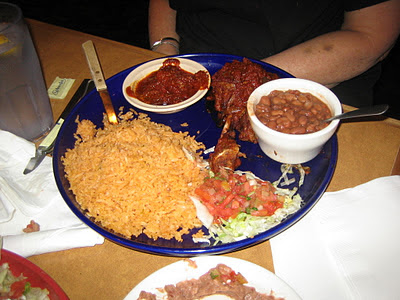 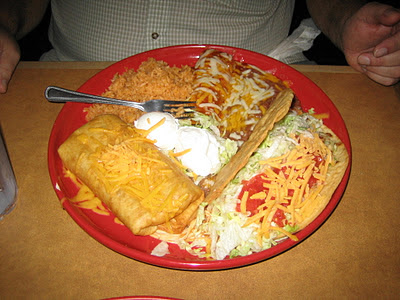 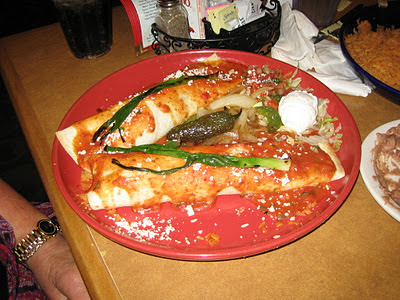 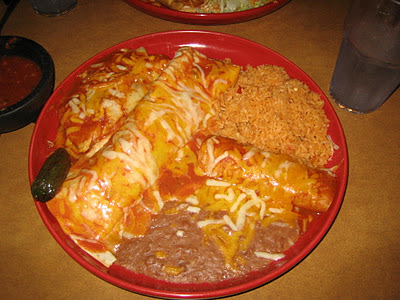 We were thoroughly blown away when our dinners were served. The portions were beyond humongous and even dwarfed the oversized 15" platters that they were served on! Steve's double-handed giant taco was a meal in itself. The burritos were at least twelve inches long and a couple of inches thick and the enchilada stretched almost all the way across the plate. As with most Mexican places, we were advised of the hot plates and cautiously dived in.

Everything tasted just as good as it looked. The enchilada was perfect and the burrito was delicious. The tamale was a little different than what I was expecting but still tasted good. Everyone loved what they had ordered. But we had all ordered WAY too much food! The portions were so big there was enough to take home for another meal.

A dessert was in order and we ordered some coffee and tea to go with it. One dessert and four spoons ended the meal. The service was friendly and accomodating but the mariachi band quits at 9pm so we didn't get much of a chance to hear them.

I will definitely return to Patron Azteca in the future. There are about ten items on the menu that I want to try including the Molcajete and the moles. If you see me there be sure to tell me you read about it here.