When I moved to Delray Beach, back in June of '02. one of the restaurants we scoped out was 3G's on Atlantic Ave. We had moved from Davie, where we were used to eating in restaurants amid diners of all ages and we were quite taken aback at the average age of the customers at 3G's. The aisles were a traffic jam of walkers and wheel chairs. The patrons were rude and abusive and the wait staff retorted accordingly. After my second visit I took this place off my radar and didn't return.

But I think I made a mistake. Last week Michelle checkout a store in the same strip center and suggested that we give 3G's another chance. And so we did.

It was only 4:30 pm, so there was no early bird crowd and we were seated without a wait. The menu was full of tempting items and as our waiter, Josh, brought our drinks, we asked for more time to check out the menu. In addition to all the items on the menu there were about 12 specials.

"My first impression," Michelle said, "is that this place is very clean and very efficient!"
A far cry from what I had observed eight years before. Josh dropped off our drinks and a short stack of the freshest rye bread I've had in a long while.

We both started with a cup of matzoh ball soup. The soup was served very hot (that's a plus) and after tasting and adding a small amount of salt we both found it quite delicious. The matzoh ball itself was extremely light and I would say one of the best I've ever had. For the rest of my dinner I chose the grilled chopped steak with grilled onions and mushrooms, mashed potatoes, and the green vegetable of the day which was my favorite, spinach. 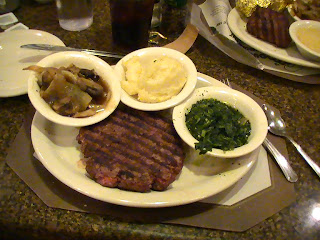 ﻿Michelle opted for one of the daily specials: filet mignon with a sweet potato and applesauce. 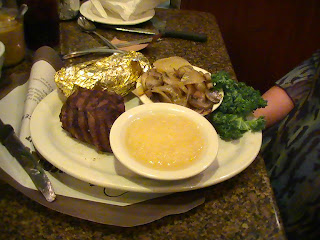 All the food was between good and great. Michelle enjoyed hers as did I and I boxed some to take home. Our dinners also included a dessert for each and we chose chocolate bobka that we also took home and ate later with coffee.

Our waiter was attentive and efficient, the food was good, and the choices were abundant. What more could you ask for? Oh, there were no traffic jams of walkers and wheelchairs in the aisles!

On our way out at about 5:30 there were about 40 people waiting for a table so when you go plan accordingly.

Next time I come I'm going to try one of their succulent looking deli sandwiches.

Let me know how you liked it!
Posted by Engine Builder Deals at 2:04 AM