Dominic's has become one of my favorite Italian restaurants. A friend first introduced me to Dominic's at their Hypoluxo Rd. location. "It looks like a pizza joint," he said, as he was giving me driving directions. And he was correct. The waiter suggested the chicken rollatini daily special and I was happy to oblige. I skipped the salad and instead opted for the pasta fagioli. I often rate a restaurant on the taste of the pasta fagioli and Dominic's rated high!


Since that introduction I discovered their Congress Avenue location in Boynton and have been a regular there ever since. Whenever I have a yearning for Italian food  I think of this place.  I have tried several of the entrees as well as the daily specials and have found them all to be terrific. And the pizza! The pizza is "to die for" and I think it is one of the best pies in this area. I ask for mine to be "thin and crispy" and it is always perfect. I took the picture on the right and I know it looks fake, but believe you me it is the real thing!

﻿
﻿ On this particular visit Michelle and I started out with a bowl of our favorite soup, Pasta Fagioli. She ordered the Chicken Cacciatore, which she said was the best she ever had in her life! She had it served over penne. She ate about half and boxed the rest for lunch the next day. My lunch! Such large portions! I had three pieces of pizza and boxed up the rest for later. 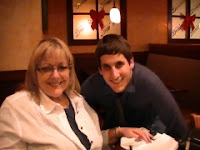 ﻿We are always greeted with a warm "hello" and although they are busy we have never had to wait very long for a seat. They even have a nice eating area outside with an overhang. The wait staff is quick, efficient and friendly. Justin keeps garlic rolls on the table, our glasses full, and checks on us regularly throughout the meal.
Ask for him when you go and tell him you saw it on WPS. Scroll down for more pictures.