Since living in Delray Beach I have taken the tour of downtown Atlantic Avenue about 100 times, more or less. Everytime I passed Big Al’s I promised myself that I was going to sample some of his original philly cheesesteak sandwiches. So when I finally ventured into the sidewalk venue I was more than happy to sample one of the best philly cheesesteaks I have ever had and vowed to return. 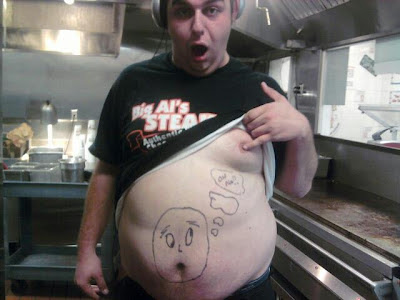 When I spotted the new location on Congress avenue a few weeks ago I thought I would drop in and have a sandwich as soon as possible.
I have a lot of nice things to say about this place. First of all the bathrooms are immaculate. The whole place is clean. Michelle and I ordered Philly cheesesteaks; mine with whiz, hers with provolone, and both “wit” onions. Fries and diet cokes completed the order. The fries were superb and what can you say about a fountain diet coke. But the sandwiches just didn’t hit the spot the way they did in downtown Delray. The roll was perfect. Soft and tasty. The whiz was almost non-existent and the steak looked and tasted like steakums from your local Publix. The onions were a little crunchy like they were undercooked and the whole sandwich reminded me of dorm food when I was in college.
Now, don’t get me wrong. I’ve never had an “authentic” philly cheesesteak. I’ve never been to Pat’s or Geno’s. In fact I’ve never even been to Philly so who am I to compare? Maybe this is what Philly people call authentic? I think not!

I remember the best steak subs I ever had. Dan’s subs on Sunrise Boulevard, across from the railroad tracks near downtown Fort Lauderdale. There’s a Home Depot there now. Dan threw the thinly sliced ribeye on the flat grill where the onions were already sizzling then as the meat and onions cooked he chopped them up with the side of his spatula until they became a complete mixture. If you wanted mushrooms he tossed them in near the end then placed slices of your selected cheese on top, scooped it all up and dropped it into a waiting subroll. Served in a basket with some of the best, piping-hot fries I ever tasted.
There was a big difference in the taste and consistency of the sub I had downtown compared to the one on I had at the Boynton facility. I think I’ll check out the Delray location and see if it has changed. Let me know your experience by commenting at the White Plate Special.

I absolutely love Big Al's Steaks! I am not a resident of FL, so I consider it a treat when I am there to visit to have an authentic cheese steak with whiz and onions. I always have sweet peppers on the side with fries. The fries are fabulous dipped in the sweet bbq sauce. Also be sure to try a Birch Beer instead of a diet coke!! I hope you give them another try, because they truely are authentic philly steaks just like Geno makes!

Honestly? This place doesn't make much of a cheesesteak sandwich at all. There is a place in Deerfield Beach that is actually inside a gas station called Direct From Philly. This is the only cheesesteak I have ever eaten in Florida that reminded me of Philly steaks. They use real Wiz and don't skimp on it at all. The use Amoroso rolls from Philly and much more and higher quality steak than the sliced steak ums that you get at Big Al's.