I was introduced to Christine Lee's at Gulfstream Park about two years ago and have been going there almost regularly ever since. If you haven't been there it is on the third floor of the Gulfstream Casino/Racetrack. Valet parking is available or you can choose a self-parking spot in the vast parking area. Michelle was able to secure tickets for a recent Beatlemania Now (see more below) show at Gulfstream and we followed the show with a late night dinner at Christine Lee's.


The show ended at 9:45 and a quick elevator ride got us in Christine Lee's in about 3 minutes. We were seated immediately, ordered some drinks and an appetizer for Michelle; her favorite shrimp cocktail. She liked it so much there was no hesitation when I suggested she order another because she ate the first before I could get a picture. 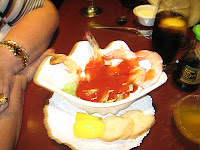 Steve and I decided to split a Chicken breast dinner which comes with two very large boneless breasts. Michelle and Ilona split the half broiled chicken. Both entrees came with a salad and a side. Steve allowed me the salad, which was very fresh. He also passed on the baked potato and selected combination fried rice as his side. I added a side of creamed spinach to compliment my meal.

Gianni, our waiter, was extremely efficient and his assistant kept our drinks full. At the end of our meal Gianni presented a special dessert with a candle for Michelle and I celebrating two years of meeting one another. It was quite a surprise! 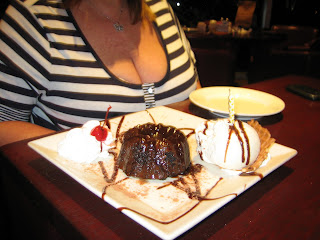 Christine Lee's has an enigmatic menu. The menu is mostly Asian specialties but the House Special is their Prime Rib and Prime Sirloin Steaks. I've had both and they are definitely worth the price. The desserts are worth leaving room for.
﻿﻿﻿﻿﻿﻿﻿
﻿﻿﻿The great thing about Christine Lee's is that you can make a whole night out all in one location. Take a walk thru the Village of Gulfstream Park, watch the horses race, take a chance at the slots. have a good time!

The Beatlemania Now show started at 8:30pm. It was held in one of the larger rooms on the second floor of the Gulfstream Casino. We were seated and ordered a couple of drinks and some snacks to hold us over til dinner. An overhead projector played old newsreel videos of the real Fab Four at different stages of their career and some social commentary of what historical things were happening at the same time. The show lasted about an hour and the band had the audience singing, stomping, shouting, and clapping throughout the performance.

It was a good show allthough the performers were not on target 100% of the time. There were a few "flubs" which only made the evening more enjoyable. This is only one of many Beatles tribute bands that tour the country.
Posted by White Plate Special at 12:54 AM

Christine Lee is my ultimate favorite.I am a Platinum status and they treat me like a Queen!!!!!!!!!!!!!